Another very special day out with the Branch Line Society in conjunction with West Coast Railways, Nemesis Rail and Network Rail, raising funds for the Rethink Mental Illness charity. Featuring heritage traction in the form of 31128 and 37668 and some rare track, a great day was enjoyed by all participants. As usual, a few shots to start, many more to add...
Read More 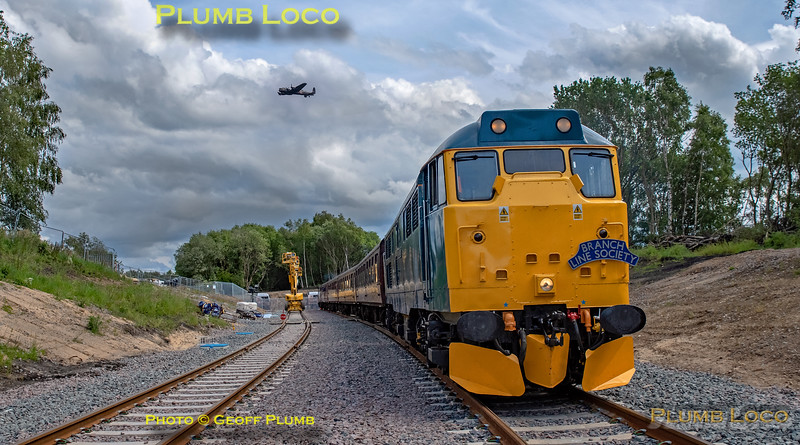 Part of what was the LNWR line from Manchester Junction, just south of Springs branch, to Tyldesley, is now being reinstated as the shunt neck from the new EMU depot being built at Springs Branch, Wigan. The line remained open for a while as far as Bickershaw Colliery, which closed in March 1992 and the track subsequently lifted. The BLS "Sunday Yicker" tour train stands on the newly-laid track in Bickershaw Headshunt No.1 with 37668 close to the stopblocks and 31128 facing Springs Branch. 14:33¼, Sunday 9th June 2019. In a remarkable coincidence, the sole remaining airworthy Lancaster bomber in the UK, PA474, part of the Battle of Britain Memorial Flight, flew over after an appearance (with two of the Spitfires of the BBMF) at the RAF Cosford Airshow. The flight is based at RAF Coningsby in Lincolnshire, so quite where the Lancaster was bound at this point is not known. The photo is a slight "cheat" in that the aircraft has been made to look nearer (and lower perhaps!) than it was, but it does appear at this point in the original photo. The Lancaster was built in May 1945, the Class 31 only fourteen years later! Photo taken with permission and under supervision. Digital Image No. GMPK6955a.