Another wonderful day out with the Branch Line Society in conjunction with 565 Railtours, Colas Rail, West Coast Railways and Network Rail. The tour was planned by Simon Pilkington of 565 Railtours to raise money for several charities in memory of his late father, Arthur Pilkington, who was a Police Sergeant and his number 565 inspired the name of the organisation. A five-figure sum was raised through the fare-box, on board sales and raffles for the charities Severn Hospice, Wales Air Ambulance and Cancer Research Wales. Once again, I went along as "official photographer" and a few shots are now on the site, with more to be added as and when time allows - as per usual...
Read More 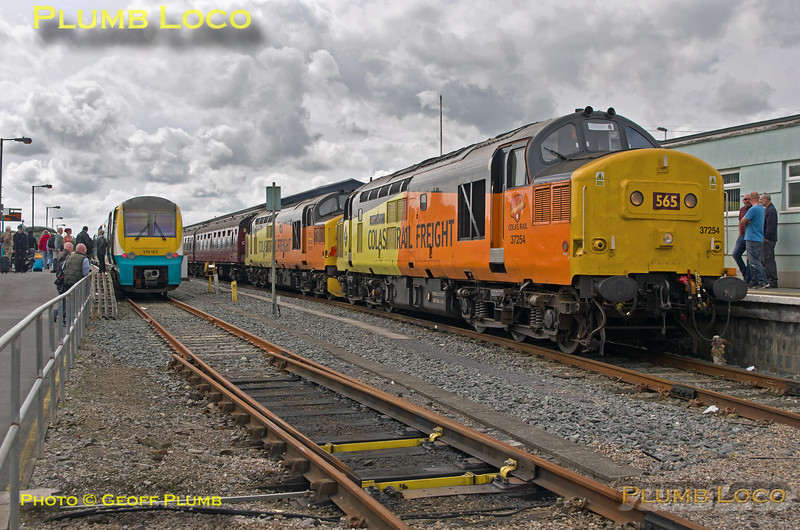 The BLS "565 Special" arrived into Platform 1 at Carmarthen at 13:30, just two minutes late, for a layover and break for the passengers. In the meantime, the coaching stock water tanks were replenished and then 37254 ran tound the train via the little-used headshunt so that on departure the train could be topped and tailed over the Central Wales Line as far as Llandrindod Wells, where the loco ran round again to double-head back to Chester. With the train standing in Platform 1, ATW 175 107 is reversing direction in Platform 2 working 1V37, the 08:30 from Manchester Piccadilly to Milford Haven. 13:49¼, Saturday 2nd September 2017. Digital Image No. IGMP30757.